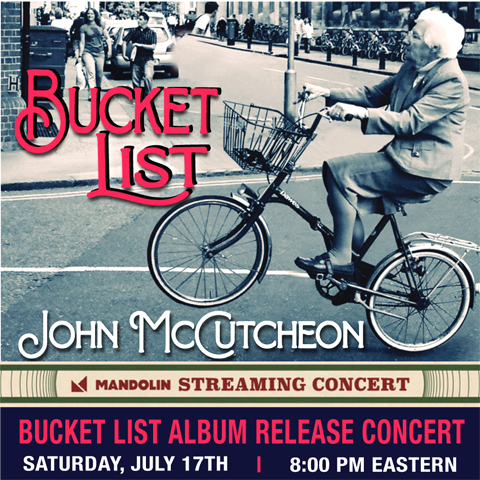 “John McCutcheon is not only one of the best musicians in the USA, but also a great singer, songwriter, and song leader. And not just incidentally, he is committed to helping hard-working people everywhere to organize and push this world in a better direction.” — Pete Seeger

A year off the road has provided John McCutcheon a lot of time to write.  A lot of songs.  About one hundred, in fact.  Cabin Fever: Songs from the Quarantine, written in the first three weeks of the pandemic, ended up being the #1 album of 2020 on the Folk DJ charts.  But John wasn’t done there.  He’s been in his home studio, sending files to his long-time recording bandmates in their studios, recording two albums of new songs at once.  Really.

Bucket List is John’s 42nd recording and helps launch John’s 50th year of touring the world.  And for a couple of hours on July 17th, you can have a front-row seat as he debuts the entire album live.  His storytelling is as engrossing as ever, his eye for detail and his ability to find the miraculous in the ordinary has never been sharper.  Bucket List is, in turn, heartwarming, hilarious, incisive, and soaring.